His Name Was Wren

A town with a secret.
A boy with a key.

During the blackout of 1944, in the small English town of Hurstwick, something mysterious obliterates the church spire and slices through the nearby woods. Was it a secret Nazi weapon, as some locals suggest? Or just a downed plane? Evacuee George Moss finds an otherworldly explanation, then tries to keep it hidden.

Years later, Max Cannon moves to town. With help from his new friends, Ellie and Isaac, he learns of the secret that some residents have guarded for over seven decades.

When that secret is threatened with exposure, strange things occur, and the army descends on Hurstwick. As does a visitor from much further afield, leaving Max and his friends in the middle of a deadly struggle…

What People Are Saying

"I don't know why I picked this up, but I'm so pleased I did. It's labelled as YA, but I think it stands anywhere you want to put it, despite the MCs being children. It's got a perfect balance of history and sff that landed in my sweet spot with a big thump. The characters are very well drawn and the flip between 1944 and the present was done beautifully. I loved the visiting aliens, their personalities and their tech, but it's the children who really make the story beautiful. It's a story about humanity and I really think you should read it! Also, there's a dog!" - A.L. Lester

Listen to Audiobook
Where to Buy 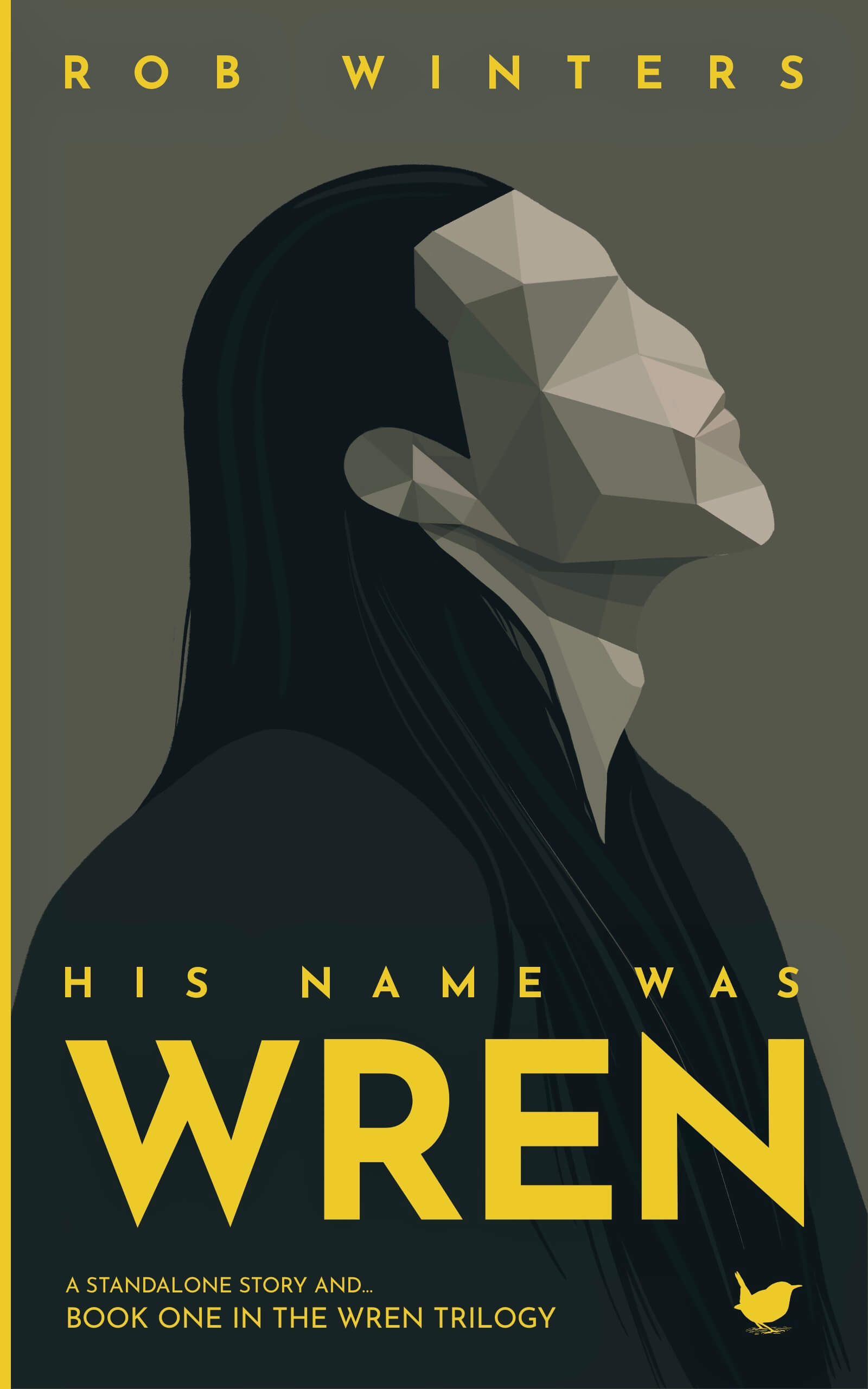 Visit Audible.com or Audible.co.uk and listen to 11 Hours of Sci-fi Mystery Adventure.

Listen to the opening scene

Sample from His Name was Wren
by Rob Winters

A loud thudding on the door broke Henry Crinklaw’s concentration. He slammed down his pencil and left his small dimly lit room in a huff, his gangly legs carrying him down the narrow wooden stairs to the front door. “I made it clear I’m not to be disturbed,” he said, wrenching it open and spilling light onto the dark street.

“Henry!” roared a rotund man standing on the pavement. Behind him sat an elegant black car, its headlights dimmed, its driver leaning against the long bonnet rolling a cigarette. A woman in the back seat, her face caught in the glow from the hallway, glanced at Henry then turned away.

“Mr Haywood?” Henry said, recognising his superior. “What are you doing here? I mean…sorry, sir. This is an unexpected surprise.”

“Surprises generally are unexpected, Henry. Are you going to invite me in?” The man’s jolly demeanour was evaporating as he waited for his invite.

“Yes…of course. Come in, sir.” Henry Crinklaw stood aside, and Malcolm Haywood entered, bringing with him a strong odour of cigar smoke.

“And you should really turn that light out,” he complained as he climbed the stairs. Henry followed.

“Well, this is cosy,” Malcolm said, stepping into the modest accommodation. He walked over to the fire, which threw a jittery glow around the room. The only other source of light came from a lamp angled down upon a messy desk.

“This isn’t a social visit, old boy,” he said, “but you go ahead. If I were stuck in this little town, I’d be drinking non-stop.”

Henry poured himself a drink and watched as Malcolm Haywood studied the wall. It displayed everything they knew of the crash. Every inch was covered. Mostly photos: upturned trees, rocks split in two, the decapitated church, and the half-destroyed stone shack, with the church bell protruding from its side. There were several images of footprints, wooden rulers next to them for scale. Most appeared to be the boot prints of a child accompanied by a small dog; other prints were larger, sleeker and possibly barefoot. Lines of string linked each image to a pin in a large aerial photo, which showed the town and the long black scar in the woods to the north.

To the side of the aerial shot was a map of Europe. It was criss-crossed with lines representing flight paths of known German and Allied planes from the night of the incident. None came close to the lonely red pin marking the small market town of Hurstwick.

The wall was impressive, but even with the vast amount of data collected, they had no idea what had come down in the woods that night. Henry suspected he was about to get a dressing down for the lack of progress. Malcolm would no doubt want to hear about all the breakthroughs he hadn’t made, all the leads he hadn’t followed up (because there were none), and all the clues he had yet to uncover. They’d given him an impossible task.

Henry took a deep breath, turned his drink into a double, then joined Malcolm at the wall.

“Over two months, Henry,” said Malcolm, removing his gloves and hat and dropping them on Henry’s desk along with a brown file retrieved from inside his coat. He angled the lamp to throw more light to the wall. “And what have you to show for it?”

It was a question that didn’t need an answer, but Henry answered anyway. “Nothing new, I’m afraid, sir.” He took another deep breath, disguising it well, he thought, with a simultaneous swig from his glass. His eyes flicked to the brown folder, then back to the face of his superior. He took another large gulp of his quickly disappearing drink.

“So it’s a mystery?” Malcolm said after a pause, rolling on the balls of his feet.

“I don’t like mysteries, Henry. I get concerned. Mysteries cause confusion, and I don’t like confusion either. I like things neatly labelled and filed away. Dealt with. Done. We are trying to win a war, Henry, and right now, things are looking good. Brookie thinks so, anyway. But he’s not thinking about this, is he?” He gestured to the wall. “Whereas I am thinking about this. I think about this a lot. And I’ll say it again — I’m concerned.”

Mr Haywood cut him off with a wave of his chubby hand. “However, we are where we are, and we seem to have found ourselves a little mystery that refuses to be dealt with, haven’t we?”

“So,” he said, cutting him off again, “I brought something for your little wall of irregularity.” He nodded to the folder on the desk.

Henry put down his now almost empty glass, picked up the folder and opened it. Inside was a grainy photo of a rocket, mid-launch. Henry shot Malcolm a confused look. Why was he showing him a picture of a rocket?

Malcolm Haywood nodded. It was a nod that said carry on, there’s more.

Further photos showed pieces of wreckage lying in fields. People bent over damaged fragments of pumps, valves, tubes and motors. Finally, he came to a short transcript describing a test launch of a rocket.

Henry looked up, still confused. “Sir, is this relevant? We ruled out rockets and flying bombs on day one. We would have found the wreckage; there would have been a crater.”

“That, Henry, is a V-2 rocket, as I’m sure you are aware. On its own, not very interesting with regard to your investigation. But if you look at the transcript, it’s frightfully interesting. It comes from one of ours on the other side. She took the photo; according to her, it was a test launch — not meant for us. They shot it straight up just to see how high it would go.”

Henry scratched his head. “With all due respect, sir,” he swallowed, “I don’t see a connection here.”

“It was a historic moment,” continued Malcolm, as if Henry hadn’t spoken. “At any other time, we would have celebrated this event. Because, that thing,” — he jabbed his finger at the photo — “that marvellous and terrible thing, became the first object to leave the Earth’s atmosphere. That thing, Henry, went into space.”

Henry looked down at the photo again. It was indeed an impressive achievement, he thought. Then his look of confusion returned.

“Look at the date, man,” said Malcolm, impatiently. “It’s from the night in question.”

“But surely a coincidence, sir. Like I said, rockets leave wreckage and craters; they explode. None of those things happened. It can’t have been this rocket that landed in those woods.”

Malcolm smiled. He was clearly enjoying being a step ahead. “That rocket,” he said, “had a trajectory that would have seen it land in the Baltic Sea. Not in the woods outside Hurstwick—”

Henry’s face had given up looking confused. He stared blankly as Malcolm Haywood continued to talk.

“—But we know it didn’t land in the Baltic Sea.” He took the folder from Henry’s hand and placed it on the desk, spreading out the photos of the wreckage. He stabbed a stumpy finger at each image. “That was found in Kent. That, just south of Paris. And that was recovered from Blizna in Poland, as part of Operation Wildhorn. All are believed to be pieces of that same rocket.” Malcolm’s smile was widening as he realised Henry was starting to get it.

Henry grabbed a pencil and rushed to the map. He drew a small cross next to Kent, another south of Paris, and a third next to Blizna in Poland. He then stepped back and placed his hands on his hips. “Well. I’ll be…. That is some spread.”

“Indeed,” replied Malcolm, retrieving his gloves and hat from the desk. “The boffins estimate the rocket came apart violently at an altitude of sixty miles. As it wasn’t carrying explosives, we can only assume that it—”

“Looks like you’ll be staying here a little longer, Henry.”

Henry didn’t reply; he just stared at the map.

Malcolm scanned the wall, putting on his gloves. His eyes moved from item to item. “I don’t see the drawing,” he said.

Henry frowned, trying to remember where he’d put it, then hurried to the desk and rifled through a box of files. Eventually, he removed a piece of paper and pinned it to the wall.

It was a child’s drawing of a man in black with very long black hair.

Henry Crinklaw shook his head, not taking his eyes from the drawing. “The officer doesn’t remember much about him. Just a small boy with messy hair. It’s all I have to go on.”

George Moss was under his bed. Just moments before, he’d been sound asleep on top of it. Now he was under it, hands clapped over his ears, waiting for the house to collapse...

Where to Buy
Thank you for letting me into your inbox. I’ll try not to make a mess. 🙏

Please check your email for confirmation.
Oops! Something went wrong while submitting the form.